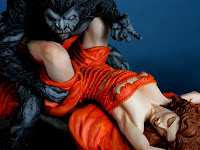 Once upon a time, in a land not so very far away, there was a fairytale princess of a girl named Amethyst. She was fair of face and form and so, had many admirers.

Odes were written about her beauty—hundreds just about her eyes, which were described as aqua, ocean, and lapis. Whatever their color, often dependent upon her mood, everyone agreed to look into them was to fall in love.

Some of her love-struck swains would wait until she rose from a chair, only to sit upon it and bask in her fading warmth. They would look for single, precious strands of her hair and keep them like treasures.

Grown men lay in beds next to willing wives and refused to touch them. They preferred to close their eyes and dream of the way Amethyst would respond, if only a man might be lucky enough to touch her vanilla-scented skin. The deviant among them spun feverish fantasies where she knelt at their feet, doing things unholy at their whim.

Many wore bruised knees from fervent prayers for even a smile from her rosebud lips. Some struck bargains with the devil (who profited greatly from her refusal to bestow even the slightest hope upon anyone).

Amethyst did not know any of these things and, had she known, she’d not have cared; though she moved, sat, spoke, and sometimes even looked her suitors in the eyes, her mind was elsewhere, along with her heart.

The jealous said she was stuck-up. The spiteful said she was too stupid to know of the stir she caused all around her. The envious said people were only attracted to her because she was so detached from all of them; her beauty overshadowed by her coldness.

None of these things were true.

Amethyst was lost in daydreams of a time when she had been a chubby cheeked child, just beginning to bloom into a woman. She had climbed over a towering wall and run away—her spirit of adventure taking over her good sense, her mother said later.

She had gotten lost in the primordial forest surrounding her home, wandering for a day and a night in the cold unknown.

She stopped when she could go no further, one of her dainty, bejeweled shoes gone astray. Her feet were cut and blistered, her dress torn and dirty. The long, red hair boys would someday write poems about was a cloak of ratted tangles she wrapped around herself for warmth.

When the moon rose high in the sky on the second night, she huddled in the hollow of a welcoming tree, making a pillow from fallen leaves. She cried pitiful tears until she fell into a fitful, exhausted slumber.

When she woke it was darker than dark, and colder than cold, but it was far from quiet. She heard many noises—the skitter of tiny toenails on bark, wind whispering through trees, owls hooting. But the noise that alarmed her—made her sit up straight, ears tuned—was the sound of heavy footsteps coming closer and closer, until finally they stopped, right by her shallow hiding place.

Amethyst whimpered and squeezed her eyes closed, sinking as far as she could into the sheltering tree. She prayed in this moment of terror, not to any god but to her mother.

When she dared peek to see what had come for her, she saw a man. Crouched, peering into the tree, he was illuminated by moonlight. His face was handsome, his expression calm, but he was a stranger.

She looked at him, a fat tear rolling down her cheek. The man reached into the darkness and captured it on the tip of his finger. It shimmered there like a jewel, bewitching Amethyst and drawing her cautiously from her hiding place.

She allowed herself to be soothed and gathered into his arms. He lifted her atop his fine horse, a wildly beautiful creature. There was no saddle yet, when they settled upon its back, she found the seat most comfortable; she lay perfectly nestled within the man’s arms, her bottom snug against his thighs.

He was slender, his age hard to tell. He looked young in some ways, wise and old in others. He was tall. His hair was very long, very dark. His eyes were hauntingly beautiful. His touch was gentle.

Amethyst decided to trust him and relaxed her body against his as they made their way through the forest, and over the fields of heather surrounding her home.

It was only later she realized she had not told him where she lived or spoken a single word to him, not even a ‘thank you’.

As they rode, he talked to her, his breath warm on her flushed cheeks. He told her stories of far-off places and magical things. He wove tales of a life that might be had one day for a fairytale princess of a girl, and a man with no home. He spoke of love, passion, and happily-ever-after. He hinted at grownup things they might do together or, even with others. He said no matter what, he would always belong to her, and she to him.

She listened, turning her face into his chest. No one had ever spoken to her of such things. Her mother had only talked of the love between a husband and his proper wife, and of the necessary coupling that would result in children.

Amethyst listened to the man speak of other things and imagined each and every one in vivid detail. She’d thought she was all alone in her secret desires, a very bad girl for dreaming of and longing for such wickedness, but he made her feel safe, understood. He made her feel as though anything were possible.

By the time the strange man rode away, leaving Amethyst at her garden gate, she was in love. Spellbound and overwhelmed by emotion, she was never able to think of much else as she grew up.