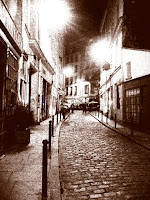 Lately, I’ve been rummaging around my collection of writing ideas and unfinished work. Sometimes, it’s very clear why I never completed a particular piece, why I abandoned those words in favor of others. But, sometimes, I come across things I don’t even remember writing, things that seem like they should have gone somewhere other than cold storage. Like this one.

What was I doing?

This was insane, heading down an alley in Paris with a man I didn’t know like he was a trusted lover, his hand riding my ass like he owned it, like he wasn’t just some French fuck I’d picked up in a bar two minutes ago.

My week had been weird all around; I’d been traveling with my best friend, Lila, and my boyfriend, Scott, who bailed on me after a fight in Barcelona that started over the best train to take to London and ended with them confessing to a drunken fuck the night before. They are probably back in Portland now, two days early, fucking each other just like before we left, even though they denied it. Lying mother-fuckers.

I’d ended up at Harry’s Bar because Scott had wanted to see it; the idea that F. Scott Fitzgerald and Hemmingway had frequented the place in the ’20s and ’30s apparently had given wannabe writer Scott a hard-on.

Tonight, the last night of my trip, I’d gone to spite him, feeling powerfully and happily alone. The bar was all right I guess, more knock-off French than “Casablanca”, but it was dark and the drinks were reasonable in a city where most tourist places were a total rip-off. After several glasses of house red and a few chanteuse songs I was sad and drunk as I wove a somewhat wobbly path toward the door.

Getting laid had been the last thing on my mind.

I’d spotted him leaning against the bar. He was dark, handsome, and unmistakably French, wearing a pissed off expression. He came complete with hooded eyes and hawk-like features that managed to be sharp and sensual all at the same time. He’d smiled and I had moved to him as if he was magnetized.

The woman sitting on the stool closest to him glared at me when I pushed past her and held out my hand to him. He took it immediately, threw some bills on the bar, and pushed open the door for me. A blast of night air gusted through Harry’s smoke.

He seemed as eager as I, his long finger finding the crease in my ass, sliding into it, pressing the silken fabric of my skirt against the shocked, bare pucker of my asshole, urging me along. I was glad I had left my panties at the hotel.

His boots and my heels were loud, disharmonious, the noise bouncing off sepia colored buildings. Even the alley behind 5 Rue Daunou was elegant—cobblestones, wrought iron stairs, potted trees, creeping vines and flowers.

He pushed me into a stairwell. It was dark, but through an archway I saw a courtyard, a silent fountain standing sentry, but we didn’t go there. He smiled the smile he’d flashed in the bar, the one that had made me follow him out the door, the one that was dangerously sexy, snarly, and confident. He tugged me under the iron stairs into a darker space, thrusting his hands between my thighs and pushing my dress up. He explored my ass and cunt, not missing a thing. This man knew his way around a woman’s body.

I sucked in a breath, my hands curling into the wall, my body bowing to lift higher for his exploring hands, my knees spreading. I groaned as he sunk long, crafty fingers into me.

He didn’t say a word. He didn’t have to.

I was so wet, so slippery; he knew I liked everything he was doing.

I reached for his cock, and he growled when it sprang into my hand. I jacked him off in the darkness, my trembling fingers scraping against his spread fly and the rough thatch of his pubic hair.

“Someone’s coming!” I whispered, squeezing my legs together, trapping and stopping his hand, my eyes wide as he rested his forehead on mine, his fingers curled inside me still.

We watch as a drunken couple fumble their way through the doorway and up the stairs above us. She flashes us long legs and a hairy cunt as they pass.

I close my eyes so they don’t see the luminous, hungry shine of them in the darkness, and I sink my teeth into the fine cloth of his suited, very broad shoulder, to quiet a whimper caused by the scent of him—cigars and Paris—the feel of him; hot mouth on my earlobe, swivels of palm over clit until I burn.

My hand itches to wrap again around his hard length, uncut and thick, but he beats me to it, hiking my leg up and spreading me wide, prick in hand.