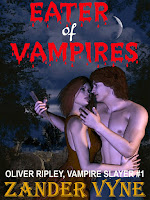 Coming soon from Sizzler Editions –
Betrayed by his family, black sheep vampire hunter, Oliver Ripley finds himself on the run with his sworn enemy, fledgling vampire Miranda Vladula, who claims to hold the key to secrets that could free them both.

Taught to hate vampire slayers, Miranda thinks she will do anything to lure a Ripley into her trap, but sexy Oliver does not turn out to be the cold-hearted killer she expects.

Discovering their fates intertwined, Oliver and Miranda fight enemies they did not see coming when they uncover a plot that could destroy them and everyone they love. Forced to face a horrific truth that challenges everything they have ever believed, with no one to trust but each other, they must fight their growing lust even as they battle for their lives.

From Chicago to Paris, in kinky sex clubs and underground lairs, tension escalates between their bloodlines. As their world crumbles around them, Oliver and Miranda find danger, secrets, and temptations wherever they turn. Burning with passion too hot to ignore, not even the threat of death can tear them apart.

Does Oliver have the strength to fight the betrayed Vladula clan and a legion of angry vampire eaters? Can he resist his hunger for Miranda, knowing to succumb to passion could kill them both?