Clue Review Gives Immoral: Tales of a Vampire an “A”

zander vyne > Reviews of my Work > Clue Review Gives Immoral: Tales of a Vampire an “A” 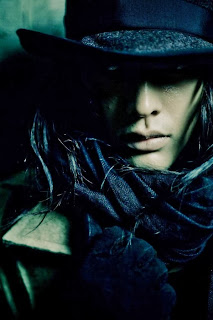 Clue Review says, “A Romeo and Juliet type story where star crossed lovers are forbidden to be together. Being in love is hard enough, but if even just a kiss could cause the death of your lover, it’s especially hard. The more time they spend together the harder it gets to keeps their hands off each other, causing them to consider tempting fate. To complicate matters, they are being hunted by vampires hunters AND vampires.”

Read more on their website
The handsome fellow on the left is one of the pictures I kept on my computer for inspiration as I wrote Oliver Ripley’s scenes. Though perhaps more Victorian than reality, there was something that spoke to me in this man’s face . . . his lips, his eyes . . . that spoke of Oliver’s vulnerability when we first meet him.

In writing the Tales of a Vampire series, it was important to me to introduce readers to Oliver before he becomes the man he will be by Book Three. I wanted you to get to know him as he’s just starting out, a young, unsure vampire hunter full of hope for his future. So many books start with the hero fully formed, jaded, and hard, hurt by the world or people in it, and we only know why through his thoughts about the past. I’m almost finished writing Book Two, and Oliver tells me he appreciates that I am taking my time with his story. I hope you fall in love with him the way I have.

Click here to BUY it now
Leave a Comment on Clue Review Gives Immoral: Tales of a Vampire an “A”Reviews of my Work