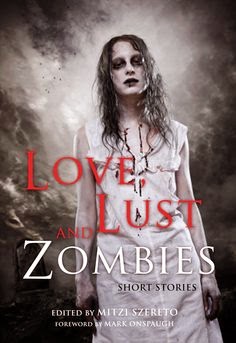 The paperback version is now available for pre-sale on Amazon, though it won’t ship until September 2015. Mitzi Szereto is, hands down, my favorite editor, so I know this one will include some killer stories.

“Let’s face it: zombies are hot, and baby, they’re getting hotter. Although not the most traditional of sex symbols, zombies are truly coming into their own, even landing on the silver screen in romantic roles, not to mention ambling and shambling across the pages of novels and television screens. Gone are those one-dimensional scary characters from George Romero’s grim and gruesome flick Night of the Living Dead. Zombies now have a lot more to offer to the non-zombie world.

From the bestselling novel Pride and Prejudice and Zombies to the hit TV series The Walking Dead, zombies are taking over as a source of entertainment. So isn’t it about time they had their more…err…romantic and sexy sides showcased?”

I’ve written before about my inspiration for the story I submitted, Under a Perfect Sun, and I was thrilled to hear it was called “literary and ambitious, sci-fi” by the publishing company. I was also honored to learn that it had been picked to anchor the book. Pretty good for a story that started as a writing challenge for me, and with a question . . . could I write a story that involved zombies and sex that also provided a logical explanation for the deed?