Some people search their entire lives for a place to call home. Some, born by the shore, never feel quenched until the dry, arid heat of a desert causes their internal landscape to gush like a waterfall. Others, surrounded by wide-open flatlands, only feel unbound and free atop high mountains, cosseted by trees.

Raised by nomads, I always wanted nothing more than a stable home—any home that would not change. However, though I have been content in many places, none nourishes me like those by the ocean.

For many years, the sea was only a dream that whispered to me like an unknown lover. It was an image captured in film and in the lyrics of songs that moved me as love songs never did. I flew over oceans and drove past them, trapped in the family station wagon, unable to convince my father to pull over and let me walk along the shore to feel the waves lapping at my adolescent toes. I fished rivers, but did not find them wide or deep enough. I swam in lakes but, in their murky depths, I felt the grounding pull of the land surrounding me and longed for a crystalline blue, saltwater abyss. 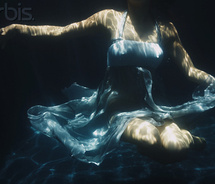 When I had freedom to roam at will, I set my sights on California and, after traveling the coast like one whose task it was to map every crevice, I found the place my soul calls home—the short stretch of rugged coastline between Monterey and Carmel. It was there I sat, on a day forever etched in my memory, and decided to pick up my pen after many long years, and write again. Inspired by frolicking otters, windswept cypress trees, and the harsh surf pounding the rocky cliffs, I began notes on what was to become my first novel. I was home. I had a purpose. My spirit was awash in salted water. Life was good.

Now, I live in Chicago, on the shore of a great lake, but the ocean still beckons like a friend who is just out of reach, never forgotten, and always longed for. I see her within my fondest memories and everywhere, in my writing, is water.

The water moves, liquid around me.

I belong to it – slippery, soft, alive. I breathe it, taste it. It fills me.

I am a mermaid, a dolphin, a goddess.

The hands on my body are worshipful, though not always gentle. Some bodies inspire me to flatten my palms, and skim lightly over their surfaces, while others seem to beg for a pinch or a rougher jerk. Some taste of the sea, while others hold the perfume of flowers on their tongues.

I go with the moments as they come, drifting from one to the next.

Buffeted by flesh, I float in pleasure.

From In The Name of The Father

The house was easy to find. It was the only one at the end of the road, perched high on a cliff overlooking the sea. Even up here, the gusty wind blew sand over Michael’s boots, and he could smell the ocean’s salted, fresh-fish scent.

Dropping his bag, he rechecked the safety on the snub-nosed .38 he’d bought in Ixtapa before hitching his ride.

Sheer, white curtains billowed through an open window of the inviting house, waving him closer it seemed. An old rocker painted sky blue moved a ghostly to and fro on the porch. Everything else was still. The only sound was the crashing of waves far below.

As Michael started walking again, he prayed Isabella was waiting.

When Amethyst was told her father’s plan, she wept for days. She cried so many tears the creek twining through her garden became a river of salted water that did not evaporate until she was long dead. Every bloom in her garden withered to dust, except for the lilacs; these flowers bloomed lusher than ever before.

Rain spills from the azure sky, washing away sorrow and taking away pain. Upon an ancient river, we now float coming and coming again as our bodies cling together, eternally pleasured and eternally bound.

“Evermore, Jack…mine now,” Diane says, pulling me under the waves.

My toes skim pebbles smoothed by time as the water takes me into a dark abyss where violets bloom in currents fed by rain—never ending rain.

****
We are born in a gush of fluid, and our bodies are composed of approximately 65% water. Like life, water is continually moving, lured by the tug of the moon, and changes in our world. One moment, it is mist, then ice, then rain. It sustains us.
In my erotica, people play dangerous games suspended over hotel bathtubs. They share their wives in bubble-filled whirlpools, and they cross rivers, pausing to look at their reflections in the water below in an effort to find themselves. Water often symbolizes love, safety, and home. It lifts the human spirit, supports the body and soothes the mind. Much like sex, it allows us to drift in a special place that is almost primal in its necessity to life itself.

If you live by the water, go there today. Get your feet wet. If you are landlocked, draw a bath, light some candles, and allow yourself to float, weightless in sensuous water. Close your eyes, and be reborn.

14 Comments on Water me, BabyExcerpts, On Writing